It took me a really long time to realize that not everyone thinks the way that I do. Not everyone has a million thoughts going on in their head at a time, ALL of the time. Not everyone worries about every little detail or analyzes every word that comes out of their mouth for hours after. My husband tried to tell me a bunch of times, but I never really believed him. When I’d ask what he was thinking about and he’d say nothing, I’d assume he was lying. Similarly, when my sister would tell me she didn’t worry about what people thought most of the time, I assumed she was lying too. I could list a ton of people and things they’d told me about the way their minds worked and about how I thought they were lying. The point is, they weren’t. My brain works differently than most people’s brains, and I’m learning that it’s okay.

My name is Danielle, and I’m an overthinker.

I can’t remember exactly when I came across the term ‘overthinker’ but I know it struck a chord with me and sent me into a rabbit hole of research as well as talking to my therapist about it in detail. The things that I read not only resonated with me, but then echoed in my mind for hours after (yep- that’s partially because I’m an overthinker!). It was like all of the emotions and thoughts and fears about my mind that I’d tried to explain for so long were suddenly written out in front of me. It was both a revelation and a relief- I wasn’t alone! I may be different, but there were others out there with the same affliction! This took such a weight off of my shoulders.

And so if any of the following sound like you, please know…

YOU ARE NOT ALONE!

(And yeah, we may be different. We may be anxious and overwhelmed and a bit high strung, but we’re still human and still deserve a little understanding and patience, especially from ourselves!)

So let’s dive in. You may be an overthinker if:

Basically, you may be an overthinker if you over analyze and obsess about EVERYTHING.

Being an overthinker doesn’t mean you’re being dramatic.  In fact, it’s pretty much a mental disorder. It’s usually linked to things like depression and anxiety and other mental health issues. (I figured out that mine stemmed from growing up with a narcissistic father and got worse with my PTSD. It’s my brain’s misguided attempt at a defense mechanism.) One of the best things you can do if you’re an overthinker is give yourself some grace. It’s a little crazy, but usually the person that is the hardest on you for being an overthinker is you!

Why are we so damn mean to ourselves?

That is what makes us crazy. We’re our own bullies!

I know what you’re thinking now- this is all well and good, but what can we DO about being an overthinker? I wish I could tell you there was an easy fix, but if there is, I haven’t found it yet. I’ve spent the last couple of years working on it though, and while I still struggle, I have gotten better and have found some relief. I’m not a therapist or psychologist or doctor of any kind, so take what I say with a grain of salt. This is just what has helped me.

Possible solutions if you think you may be an overthinker:

So what do you think? do Any of these sound like something you want to try?

I think the most effective for me for long term healing is the therapy. The best results in the moment are definitely holding my sleeping daughter, but the bad always comes back once I put her down. The therapy and mediation has slowly chipped away at a bit of it and helped me to not be as self-destructive as I once was. It helped give me the courage to set boundaries and start putting my needs above my fears.

I’m not sure which of these if any would be best for others, but I do recommend trying something. If you’re an overthinker and you let it get out of hand, it can be really detrimental. It can have a horrible effect on your sleep and on your diet which can lead to physical problems. Being an overthinker can also affect how you act which can then in turn destroy beneficial relationships or foster the dangerous ones. It can stop you from living a full life and cause crippling anxiety.

If you are suffering from being an overthinker, PLEASE look into some mindfulness or self-care activities. If it’s really bad, consider consulting a professional. I promise you it made a world of difference for me. I still suffer from overthinking, but it’s manageable now where as I was in some pretty dangerous territory just a few years ago.

You matter and you deserve to be happy. Don’t let your brain try to convince you otherwise.

Need a little reminder not to overthink things? I’ve got these cute little stickers in my etsy shop! 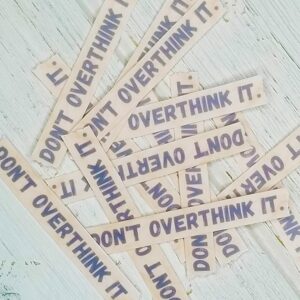 For more mental health and self care posts, click here.