It goes without saying that triggers are not fun. They are uncomfortable and emotional and can be really painful. Often, they lead to despair, depression, and anger. They can even send you spiraling into a breakdown in the right circumstances. I know I used to feel so weak when something would trigger me. It would make me feel small and stupid and afraid.

But triggers don’t have to be the end of the world.

I started triggering a lot a few years ago, right after my most recent trauma when I was diagnosed with PTSD. It seemed like everything reminded me of what I’d been through and I found myself wanting to hide all of the time. Tears were pretty much constant and I had panic attacks frequently. When something triggered me, it would leave me feeling like I was experiencing the trauma of my past all over again. I’d feel like my chest was going to explode, my body would shake and I would have trouble breathing. There were a few times where I even passed out. I never knew what was going on and I thought I was going crazy. But then I started learning about how triggers are really your brain’s way of trying to protect you.

When something triggers you, it’s your brain sensing something familiar. Something is reminding you of your trauma or bad experience and your brain wants to make sure that you’re aware of it so that you don’t go through the negative thing again.

A lot of times, we respond to these triggers the way that our brain wants us to. We avoid. This strategy might work for a while and can help you to survive in the beginning when you might feel like you can’t go on. But as time goes by, we’re going to start feeling worse and worse. We start avoiding too many things and limit what is available to us. We live from a place of fear and in a way, isolation. Eventually, we might find ourselves in a situation where the trigger is unavoidable and then starts the downward spiral.

But there is hope!

I used to just avoid and I hoped I wasn’t really missing much. I would ‘deal’ with the unavoidable triggers by getting into my own head and thinking horrible thoughts, having my panic attack and praying it would end. But eventually I’d get through it and get on with my life. It seemed like my only option. Then a nine year old helped me see how ridiculous it was to just accept that this was my life now.

My friend’s daughter has been terrified of clowns for years after being shown a R-rated horror movie by an older kid. It was so bad that she had constant nightmares, could no longer sleep without some light and the idea of anything clown related horrified her. This year, they were driving by a store that had a giant IT poster in the window and while her first reaction was to turn away, she decided she was done being afraid. 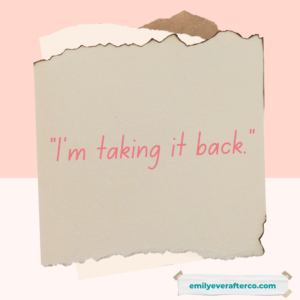 “I’m taking it back.” She said. And she forced herself to look head on. She decided that she wasn’t going to let herself be limited by something that triggered her. Instead of feeling afraid, she felt strong and brave. She was so proud when she was telling me this story and I couldn’t help but admire her. Even though she was just a kid, she had done something that I thought impossible. She stood up to her trigger, put her foot down and said no. Feeling completely inspired, I realized that I could to.

My triggers weren’t the same as seeing a clown poster, but I knew that I there had to be a way. So I started trying different things and while I do still get triggered, it’s not as often and I can get through it much quicker. But the biggest difference is that I’m no longer afraid of my life.

The first step to conquering your trigger is to identify it.

What is it that is triggering you? What is making you angry or scared or sad? There are a lot of different things that can be triggers. Sounds, places, sights, smells, certain people… It can be as specific as certain words or as general as the sound of a storm. It really depends on you and your experiences/personality. For example, the things that remind me of the person who hurt me trigger me the most. But seeing situations similar to what I went through happen in a movie or hearing certain songs that remind me of the night I got hurt can also send my mind right back to the past.

Whenever I start to trigger, I try to figure out exactly what it is that set me off. I sort of make a list of the different things that do it. This list can be an actual list on paper or in the notes app on your phone, or it can just be in your mind. The next step is to figure out why these things triggered you. Then when you’re in an okay state of mind, you can create a plan. The next time I’m triggered by this, I will…

Being aware of what will trigger you and having a plan of what to do if it happens can really help.

This way, if it happens, you’re a little more prepared and can shift gears from panic into action. Having something to do will help your brain not to drag you into the past. This helps you to move through the trigger quickly and remember that you are safe in the present moment.

Some action examples could be journaling, exercising, calling a friend, EFT tapping, dancing to your favorite song, or deep breathing. There are a ton of different possibilities you can try out. If one doesn’t work, try another. Keep trying different things until you find something that helps. Personally, I do all of these things, though I usually pick just one at a time. When it’s an entire day that triggers me, such as the anniversary of my trauma, I try to plan a fun day with a busy schedule so that I can reclaim the date. (This year, I went to the beach with my husband and daughter. Chasing her up and down the sand and holding her hand while she screamed at the ocean and sharing giant ice cream cones made it much easier to stay present.)

I have PTSD from three separate occasions in my life. While the more recent one was much worse than the other two, all three left me with so many triggers that I felt like I was missing out on life and spending all of my time trying to avoid what might set me off. Once I decided to take some of those things back, like the day at the beach, I started feeling lighter and more excited about life again!

I decided to tackle one trigger at a time.

I made my list of all of the things that were setting me off and when I was in a good state of mind, I would choose one to ‘take back.’ For example, there was a certain song I used to love that became a trigger. My husband sat with me and held my hand as I played the song and forced my mind to go to the good moments associated with the song instead of the bad ones. I did this process again and again for weeks and it started to get easier each time. Now I can listen to the song again and it only hurts every once in a while. This might seem silly, but it’s a song that is often played at parties, in bars, and on the radio so it was hard to avoid. It was huge when I didn’t have to talk myself down in public anymore.

Once I got that one done, I moved to the next one on my list.

I had my ‘actions’ for when something came up so that I could get through them. And then in my good moments, I could try to defeat the trigger for good. Like I said, I had a lot of triggers, so I’m still working my way through the list. And yes, there are certain things on the list that I will probably continue to avoid because I don’t really feel like I’m missing out on them and they’re easy to avoid. But conquering (or at least weakening) the ones that are unavoidable has been life changing!

Overall, it’s important to remember that triggers are a completely natural reaction to having been through something that was traumatizing. You are not crazy or weird or wrong or dramatic. It’s important to give yourself grace and compassion while you navigate your way through the effects of something that never should have happened to you. You are so strong and brave for fighting through it. And your feelings and reactions are completely valid, whether other people agree with them or not.

Only you can know how you feel or what you need in order to feel safe.

I hope you know that you deserve to have a good life that makes you feel happy and secure, and that you’re willing to fight these triggers. Because fighting these triggers means fighting for yourself. It’s not always easy to stand up for yourself (especially when you’re up against your own mind) but I promise you, when it comes to healing from triggers, it’s worth it. I literally breathe easier these days.

If you’re really having trouble, please consider seeking help. I personally had great experiences with talk therapy, cognitive behavioral therapy, hypnotherapy and a life coach. But I really think journaling was the most effective for me. And ultimately, you don’t just want to stop your triggers, but heal your heart and mind as well. Whatever you chose, know that you can get through this. You deserve a life you love and I really hope you get it.

If you decide to go the journal route, I’ve got some in my shop that I can customize for you with any inspirational saying or positive affirmation on the cover so that you always have your visual reminder of how much value you offer this world.

As always, you matter.

Check out some of my other posts here. And don’t forget to subscribe for some awesome freebies and discounts!