Warning: these stuffed peppers are so tasty,  you might start hearing requests for them multiple times a week. At least, that’s what happened in my house.

I threw this recipe together one night when my husband and I realized that we didn’t have a dinner plan. We figured we could either run out and grab some fast food, or I could rummage around in my refrigerator and see what I could throw together. We’re really trying to limit the amount of fast food we eat, so we chose the latter.

As soon as I saw that we had a couple of bell peppers that were probably nearing their end, I knew exactly what I wanted to do. Thankfully, I had a pound of ground turkey in my freezer that I could thaw, rice left over from the night before, and we always keep Ro-tel tomatoes on hand for easy dips. 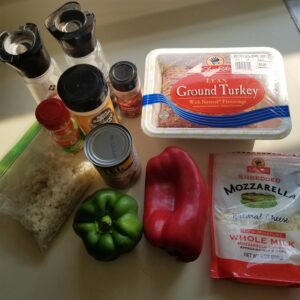 I was able to prep and cook up the filling in about fifteen minutes, and then I threw the stuffed peppers into my air fryer for another seven. The result? Perfectly crispy peppers, hot tasty filling, ooey gooey cheese, and a very happy husband. He not only cleared his plate, but he finished off mine and requested them again the next night. 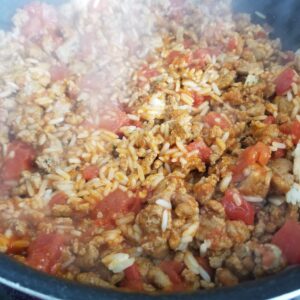 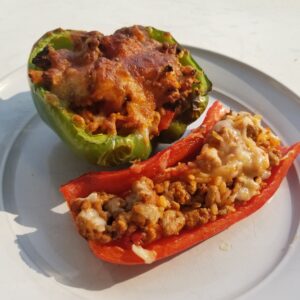 A few notes about this recipe:

For a toddler friendly version:

I simply put the cooked filling on a plate and served it with a few bite sized pieces of pepper and a little bit of cheese on the side. My daughter devours it!

This recipe makes enough for six, but there are only three of us. That means we usually end up having the second half later in the week. I’ve found that the best way to make this work is as follows: Make all of the filling at once, but only cut/fill the peppers you’re going to eat that night. Store the unused filling in an air tight container in the refrigerator until the second night. Then, cut, fill, top and cook your peppers as if it were the first time. (I like to heat up the filling for a minute or so in either a frying pan or the microwave, just to make sure it all gets hot and gooey without risking burning the cheese or peppers.)

If you make this, I’d love to see how it turned out! Tag me on Instagram and Facebook (@emilyeverafterco)!!

Check out some of my other recipes here! (Don’t forget to subscribe to follow along for more deliciousness!)