If you’re anything like me, you’ve said the words “I’m sorry” more than any other combination of words. Sometimes it’s well meaning and intentional, like when you know you’ve hurt someone. But most of the time it’s like word vomit. An instant reaction that you do not plan, coming out of your mouth regardless of whether you have done anything to be sorry for.

You apologize to everyone for everything. You’re apologizing for existing, for having a voice or needs. You apologize for taking up space. Maybe you even apologize to that chair you bumped into (yes, I’ve done that).

Does this sound familiar?

I spent most of my life being afraid of doing or saying the wrong thing. (This fear still creeps in sometimes, but I’m getting better at shutting it down.) It got to a point where my default response to things was “I’m sorry.” I wasn’t even aware that I was doing it until my father-in-law called me out on it.

Let me preface this by telling you that my father-in-law is one of the kindest men I’ve ever met and has always treated me very well. From the day he met me, it was as if I were one of his kids. I love him dearly and I respect his opinion. This is why I know that if he says you’re acting like an asshole, you probably are.

Now, he didn’t actually tell me that I was being an asshole, but he did sort of imply it. He told me that I apologized way too much and that I had to stop. Want to know what I did as a response? Yep, you guessed it. I appologized! I literally appologized for apologizing too much. At that point, I’m not sure he knew what to do with me. The look on his face spoke volumes.

It was a gamechanger.

I had never noticed before that how often I said “I’m sorry,” or that I shouldn’t have been saying it so much. After all, wasn’t I just being polite? Isn’t that what you’re supposed to say when you might have offended someone? Not when your offence was merely existing!

I wish I could say that this conversation almost eleven years ago was what made me get my shit together and stop being a doormat, but it took a few more years. Ever time we saw each other, there would come a point where I wouldn’t catch myself in time and out would come the unnecessary apology. Tom Sr. would give me that look and say something along the lines of “What am I always telling you, Danielle?” Eventually it started to sink in.

Why was I constantly apologizing? I didn’t know at the time; it was just something that I felt I had to do. Even if there was no cause, maybe saying I’m sorry meant that no one could be mad at me over anything I might not have realized that I did.

If someone else were to say that to me, I would feel so sad for that person. I would tell them they were being silly, because of course they deserved to exist! Of course they deserved to be seen and to be heard! They shouldn’t apologize for being alive or for having needs or for wanting to feel wanted. I would say something similar to what my father-in-law said to me:

But I was never good at following my own advice or giving myself the same grace that I give to the people around me. It takes effort for me to talk to myself positively and to celebrate my existence. Over the course of this healing journey, I’ve realized that the world is a better place because I am in it. I’m not tooting my own horn here, but I know that I’m a good person and that there are people who benefit from me being around. I know that I am allowed to have opinions and desires and that people are lucky to know me. Younger Danielle would have thought that saying something like that would mean that I was conceited or full of myself. Luckily, older Danielle is much wiser.

If you’re someone who constantly says I’m sorry, I want you to try something. Open the note app on your phone or grab a piece or paper and pen- whichever is more comfortable for you. For an entire day, take notice of every time you say “I’m sorry.” Write it down and write down why you said it. Maybe even try it for a few days. But regardless of how long you do it, at the end, sit down and look at that list.

If you have a long list and there are times that you don’t even have a reason listed as to why you said I’m sorry, then it’s time to take a look at how you feel about yourself and your worth. Because odds are, you might be dealing with some feelings of inadequacy. Maybe you feel like you aren’t enough or that you are a burden, and you need to apologize to the people who are unlucky enough to have to deal with you.

The next step would be addressing these feelings. This is a really great time to bring out a journal and start asking the hard questions! Why do you feel this way? When and how did the feelings start?

Then you’re going to look for proof. What proof is there that you are a burden? Where is the proof that you are taking up too much space or that you aren’t enough?

I’m going to let you in on a little secret- there isn’t going to be any proof.

You know why? Because you ARE good enough. You DO matter. Regardless of what your inner critic is telling you, you are worthy of love and happiness and taking up space. I promise you- you have value to offer this world. You just have to believe in yourself. 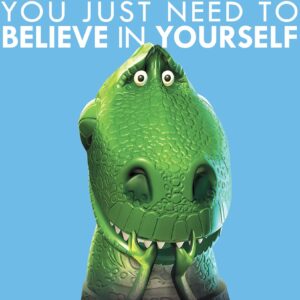 So look at that list and think about each of those times that you said “I’m sorry.” Take note of how you felt when you said it and what you were thinking at the time. Was it a genuine apology? If so, go ahead and cross those instances off the list because we’re not trying to eliminate those from our daily routine. We want to focus on the rest of the list. With the times that were left, were you people pleasing or knocking yourself down a peg? Were you apologizing for things outside of your control or for things you had nothing to do with? Really think about why you said I’m sorry, and try to make a conscious effort to only use it when appropriate.

Overall, you need to remember that it’s okay to exist.

It’s okay to show up and to take up space and to have a voice. Not only is it okay, but it’s necessary. Can you imagine how boring life would be if no one ever said or did anything? Give yourself a little grace and embrace who you are. Love yourself enough to take up space. You deserve it!

Also, remember that this is a marathon, not a sprint. It isn’t as easy as just deciding one day that you’re not going to say I’m sorry anymore. It’s a learning curve and it takes practice and time to break the habit. But if you keep at it, you’ll get there! (And I really think you’ll be so much happier when you do.)

Check out some of my other posts here. And don’t forget to subscribe for some awesome freebies and discounts!