Okay so my daughter has a LOT of toys- some days, it’s everywhere you look: toy, toy, toy. Almost half of them were second hand and a lot of the others were gifts, but the point is, she’s got a lot of options. And yet, despite the fun noises and flashing lights that a lot of them have, she has chosen to play with this rainbow sorting box that I made her more than any of them. This thing was literally made from a shoebox, some popsicle sticks and some leftover paint, and it beat out everything else.

I am someone who hates throwing things away. My husband calls me a hoarder all of the time. It’s a problem really- one that I’m working on. But because of this problem, I had an empty shoebox sitting on my vanity for months that I kept meaning to throw away. And then two weeks ago, I came across some popsicle sticks at the dollar tree and felt inspired. This whole project takes no time at all and I literally spent $1, so I’m calling it a win 🙂

First you’re going to paint your whole box white. Depending on the type of box you’re using, you might need more than one coat. I did two on mine. 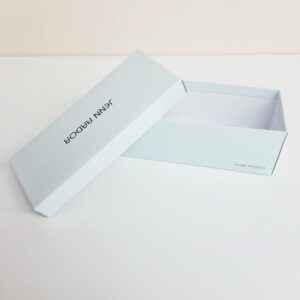 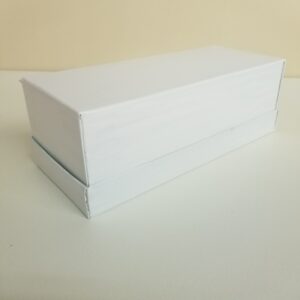 Next you’ll paint your rainbow. If you want it to look perfect, you can totally sketch it out in pencil first and get it exact. I honestly wasn’t expecting the toy to last that long so I just free-handed my rainbow.

Painting the popsicle sticks comes next. You want to use the same colors from your rainbow and paint each stick it’s own color. I did two for each color used, but again, you can do as many as you’d like.

Once your rainbow has dried, you’ll want to make small rectangular holes in each of the colors of the rainbow. I just stabbed my Exacto-knife through once, and then forced the popsicle stick through it. I pulled it in and out of the hole a few times to make sure that the hole loosened up and it would be easy for my daughter to do on her own.

And that’s it. Super easy, right?

I’ll be honest, I really wasn’t sure what to expect when I gave the box to Emily. I hoped she’d play with it for at least a few minutes, but I was over the moon when a whole half hour went by and she was still pulling the popsicle sticks in and out. It took her a while to be able to get them in on her own, but once she figured it out, she was so proud! She’d smile really big and clap each time. Then pull them all out and start over again.

This is a really great toy for hand-eye coordination and as she gets older and further learning her colors and the concept of matching, it will be great for that too! As we play, I make sure to say the names of each color and I’ll ask her where they go. Sometimes she’ll point to the right one and try to match it, but mostly she just shoves them into which ever hole she sees first.

I gave it to her over a week ago, and it’s still the first toy she grabs when she goes into her playroom. It makes me so happy to know that the smile on her face is because of something I made.

I’d say this toy would be perfect for babies ages 18mo-30mo.

So what do you think?

Will you try it? If so, I’d love to see how it turned out and how your little one reacted to it! Share and tag me on Instagram!