I remember when I was pregnant, I thought about cloth diapers. But then, like a lot of people, I was like ‘eww gross no, I don’t want to have to clean the poop out of them!’ And so in the beginning of Emily’s life, we did disposables. From what I remember, as this was a year and a half ago, we did a LOT of disposables.

Since Emily was breastfed, her poops were liquid and frequent, and most of the time, they did not stay in the diapers. And so even though I decided against cloth diapers in order to avoid having to scrub out the poop, I had to do it anyway. There were so many times I stood at the bathroom sink with my hands under the burning hot water, trying to save her little onesies and pants, and a lot of the times, my own clothes too since she was usually sitting on me when her blowouts happened. After a while, I realized that it wasn’t actually that bad.

I’ll never forget my sister’s face when she found out I’d made the switch to cloth diapers. She was so grossed out. Don’t get me wrong, it is gross. And if it was someone else’s kid’s diapers, I’m out. No way José. I hate changing other people’s kids diapers when I get to throw them out. I can’t imagine having to clean them by hand!
But there’s something about it being your kid that makes it tolerable. And since I was already scrubbing it out of her clothes, why not try out the diapers too? Worst case, I could always just buy more disposables.

I made the switch and I’m not going back!

Are there times when I’ve thought, ‘why am I doing this to myself?’ Sure. Each time she’s got a particularly nasty diaper for me to clean out. But in the end, I think it’s worth it and that it works for our family. And here’s why:

A box of disposable diapers at the Sam’s Club near us is about $35.00. Right now, that box would last maybe three weeks. (In the beginning I think we went through the boxes way faster.) At that rate, it’s over $600 a year. Factor in that a lot of kids are in diapers until they’re at least 2, and that’s a pretty high expense. Have more than one kid? Outrageous!!

For Emily now, I have 12 cloth diapers and six extra liners that I bought from a family owned company called Anmababy, for something along the lines of $50-$60 total. They are well made and adjustable using a series of snaps, so she can literally wear them for as long as she needs diapers. And then these same diapers will be able to be used for our next baby, even in the newborn stage. $60 bucks compared to well over a thousand? I’d say that alone is worth giving them a try, wouldn’t you?

Disposable diapers have so many chemicals and when you think about how sensitive that area is… I definitely prefer to go without. Most of the cloth diapers I’ve looked at are BPA free, Phthalate free, latex and lead free. Overall, disposable diapers are safe because the quantities of the chemicals (like toluene, ethylbenzene, xylene, and dipentene, sodium polyacrylate or SAP, dioxins, polyurethane, adhesives, lotions, inks, fragrances, and pesticide residue) are small. I mean, they have to be safe, right? Because otherwise, millions of people wouldn’t be using them. But I’ve read that the odds of avoiding things like diaper rash are better with cloth diapers because of the lack of chemicals. Please note: I’m not an expert. This little section here is just based on things I’ve read and personal opinion.

Emily LOVES running around in just a diaper and I love taking hundreds of photos of her a day. This combination is made so much cuter by the fact that her diapers are covered in pink polka dots or teal giraffes or leopard print. There are SO many adorable prints available and we got a few simple solid colored ones too. They are so much more fun than disposables! 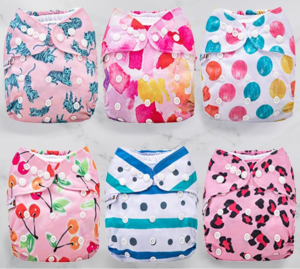 I mentioned earlier that they are adjustable. That means not having to worry about what size your baby is in or about half a box going to waste because she outgrew them halfway through. They can be used from newborn to toddler and since they fit so nice and snug when adjusted correctly, we’ve barely had any blowouts! I think I could actually count on one hand the number of blowouts we’ve had since we switched to cloth diapers. Before that, they happened at least once a week!

I hate hand washing the diapers when she goes number 2. The smell is gross and it pretty much always gets onto my hands. But I bought a little scrub brush from the dollar store and marked it specifically for diaper cleaning, and found that Highmark Hand Soap actually goes a LONG way in making it quick and easy. (I don’t know what it is about this particular soap, but it works.) I dump the poop into the toilet and scrub out the offending areas until the diaper looks okay again, and then I add them to the waterproof bag or bucket with all of her pee diapers too. Each night, I take the inserts out of the covers, put everything through the rinse cycle first, then wash with detergent, and then into the dryer on low heat. (I tend to throw the little scrub brush in there too to help keep things sanitary.) And voila! Easy-peasy.

We did hit a snag in the very beginning that took me a while to figure out. The smell. At first I worried that she wasn’t drinking enough water because of how strong her pee smelled, and that the smell seemed to linger even after she’d been cleaned and freshly diapered. Then I realized, it was the diapers themselves. Even after pulling them out of the dryer, there was an ammonia smell to them.

I did a lot of research to figure it out and apparently there can be a lot of causes of this issue. For us, it was actually that I was using too much detergent which was causing a build-up in the material. Isn’t that crazy to think about? Too much soap was preventing them from getting cleaned properly! So if you make the switch and are having an issue with smell, try decreasing the amount of detergent you’re using. If that doesn’t work, maybe you weren’t using enough and should try a little more.

Trial and error will get you pretty far!

You can try a bit of vinegar in with the rinse cycle and they also sell sprays specifically for helping with killing bacteria in diapers. Sometimes if the smell starts again, we do oxyclean and baking soda or occasionally a bit of borax. Some people recommend dawn dish soap but be careful because that can really mess up your washing machine (We haven’t tried that solution for that reason). For us, we do a weekly deep cleaning just to be safe- soaking in a bucket of hot water with oxyclean and baking soda. Then into the machine they go. But for the most part, thoroughly rinsing, washing and drying each night does the trick. Just make sure to pay attention when taking them out of the dryer to make sure they smell clean in case you need to play around some more.

Another snag was bedtime.

Since she sleeps about 12 hours at night, the inserts of the cloth diapers were filling up too quickly and we had some wet sheets. We started doubling up on the liners at bedtime and problem solved!

So there you have it! My summery on cloth diapering.

What do you think? Are you going to make the switch? I’d love to hear how it goes!!

Add a waterproof bag AND little disposable trash bags to your diaper bag. You’ll want the waterproof bag to put your used diapers into and then a little trash bag for the used wipes. DON’T flush them- horrible for your system and can clog your toilet (unfortunately, I know from experience). The baggies don’t need to be fancy or specific for diapers or anything like that. I buy them in bulk on ebay fairly cheap. I think the last time I ordered them, I got over a thousand for less than $20. Some get put with the dogs’ leashes, and some go to the diaper bag. To make carrying/remembering them easier/cuter/a little more fun, I made these little bag carriers. 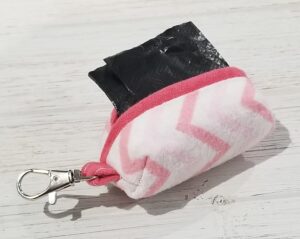 I have one dog print one on the dog’s leash, and a pink chevron one on the handle of Emily’s diaper bag. This way I never forget them, and I’ll be able to see if they’re running low. The edge of the next bag is exposed which makes it super easy to grab and take care of business! I sell these bag holders in my etsy shop. If you don’t see them on there, I may have sold out at the moment. Just send me a message and I can make a custom one just for you!

Check out some of my other posts here. ♡