Have you ever had a churro? Did you find it so absolutely amazing that you immediately had another and then another, to the point that it was actually embarrassing how many you wolfed down in one sitting? No? Just me then?

There’s a running joke among my husband’s family about all of the different ‘first’ times I’ve tried food around them. Whenever dinner is being served, I’ll hear my brother-in-law crack a joke about how I’d probably never tried it before. Sometimes he’s right, and sometimes he’s teasing me about something as basic as spaghetti. My point is, up until my early twenties, I was a very picky eater, meaning that if it wasn’t chicken fingers, I didn’t want it. The one benefit of this? There are still so many foods that I’m getting to experience for the first time, and I’m old enough to really appreciate how good they are!

Almost three years ago, I was sitting in a hotel bar in Jamaica with my little sister. We were waiting for our drinks when the cinnamon smell started wafting through the room as an employee filled the pastry case. I had no idea what it was, I only knew that I had to have it. My sister laughed at me as I took my first bite and my eyes practically rolled into the back of my head. By the end of our week at the resort, I had probably eaten about a hundred of them. They were my new favorite food.

When I came home and back to reality, I searched all over to find a churro as good, but it seemed impossible. They were always too hard or too soft, not enough cinnamon or too much sugar. (Surprisingly, the only time I found a churro that was close, it was cut up into bite size pieces and laid on top of some pancakes at IHOP.) I started experimenting at home, trying to make my own. The results were okay, but I still couldn’t get it right.

Then something awesome happened.

One afternoon, I was attempting to make snickerdoodles but screwed up with some of my ingredients. I didn’t want to start over so I rolled with it. The resulting cookies reminded me so much of the Jamaican churro that I found myself burning my tongue because I couldn’t even wait for them to cool. I’ve made them a bunch of times now and have played around with the recipe to get them to be consistently delicious. 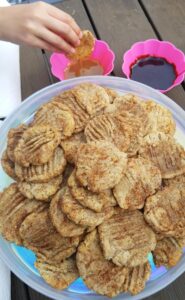 These cookies are basically as if a churro and a snickerdoodle had a baby, and this recipe makes a LOT of them. These keep pretty long too if you store them in an airtight container too! (They never last long enough in my house to go stale).

Serve them by themselves, or with warm caramel or chocolate sauce. They also pair wonderfully with vanilla ice cream!

Check out some of my other recipes here! (Don’t forget to subscribe to follow along for more deliciousness!)